Ebola Undermines the Progress made by the MDG in Sierra Leone and the Region. (Andrew Benson Greene). Jeanne Sauvé 04
In 2004, I was summoned to be a Guest Speaker at International Corporations Days (ICD) hosted by CIDA in Ottawa. The pith of the discussions then centered on the 'Millennium Development Goals' Moving from Consensus to Momentum'. During those youth years, I spoke on the panel 'What was youth doing to Achieve the MDG'?. I noted that 'Poverty is more than a lack of food, it can also be a lack of opportunity to participate." However, I believe that if the event were to happen today, as it did a decade ago, I could have added that 'poverty can be the lack of opportunities for good health care system to address health attacks as scathing as Ebola'. 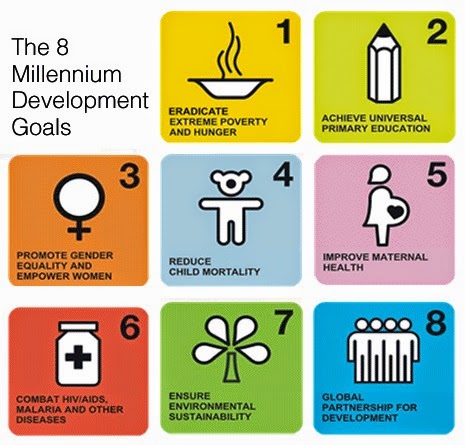 One of the major highlights of the ICD event was from Professor Sach's keynote remarks. I watched and listened attentively and with admiration, as Professor Jeffrey Sachs raise a compassionate but daring plea in support of the MDG. He was the Special Advisor to the Secretary- General of UN on the Millennium Development Goals (MDGs) and the head of the Millennium Project at the time. He noted that “the current world situation can be compared to those in 1914 and 1945. He says “The world is increasingly spinning out of control,” he said, adding that this will continue unless the countries of the world learn how to live together, understand each other, and work for their mutual benefit. Is the world still disunited in the fight against Ebola or is it seeing this as merely an African-routed crises?
In 2004, Sachs expressed his views in this way; “the dangerous state of the world is not surprising given that this year, the United States will spend $450 billion on the military, but only $15 billion on development. Before peace can be achieved, the current military-centered approach must change". He asserted.
Sachs goes on to mention that “Meanwhile, eight million people will die this year of readily preventable and treatable diseases and with almost no public attention at all, he said. The U.S., the International Monetary Fund (IMF), and the World Bank place the blame on the poor for the conditions they find themselves in and see the root of the problem as bad governance."
The Ebola crises have seen the health area collapse in Sierra Leone and the sub region. In the area of health, the MDG was by and large conceived to also ‘tackle readily preventable and treatable disease’. Within this scope, we might well think of malaria, tuberculosis and possible HIV/AIDS. But was the Ebola part of this description and did the MDG’s foresee the upsurge or reemergence of a deadly disease re-resurfacing just when so much progress has been made towards achieving the MDG?
At a time, when schools of thought observed that 'Sierra Leone poverty rates was declining', the Ebola has succeeded in overturning these gains. But every assumption was that the conflicts in this regions as well as political instability and natural or man-made disasters could be forces that was going to deflate and undermine the progress made on the MDGs. No one envisioned that it was going to be Ebola, and not the political unrest so peculiar to this country or the many high odds of shortages in food, fuel, wars and economic crisis that will hinder the success made by the MDG. It is clear now that Ebola has put a serious strain on Sierra Leone reaching its goals of achieving the eight internationally-agreed targets to reduce poverty, hunger, maternal and child deaths, disease, gender inequality and environmental degradation by 2015.
Although Sierra Leone showed signs of progress in the UN agreed MDG’s over the years, and the signs of recuperating from the war was visible, the Ebola crises have suddenly hampered the country’s potential for development.
The Ebola has weakened Sierra Leone’s human capital, and depleted its economy in no small way. Sierra Leone was enjoying a stable peace, and hopes of recovery whilst battling with much strength to boost the growth of the economy, human and infrastructural development. The Ebola crisis has significantly threatened this capacity and created damaging setbacks in less than a year since the outbreak.
Although there was some progress made in the decline in the poverty rate, maternal and child mortality, gender equality, this has been steadily reversed by the upsurge of the Ebola attack. My guess is that even after Sierra Leone recovers from the virus outbreak, there will be a potential for the development to be catch up really slowly long after the Ebola crises is over. Sierra Leone and the neighboring countries of Guinea and Liberia are facing grave consequences and mammoth challenges as they go in battle against the Ebola, which in less than a year has so gruffly halted their path towards reconstruction and development.
Once the Ebola is gone, and the country comes back to it feet, Sierra Leone must ensure that the structures are not only seen to work but actual work to ensure that there is good governance, economic diversity, accountability, social protection for all, human rights for all including the most vulnerable. In spite of the significant headway in human development, it is clear that the steadfast gains from the MDG will make way to a continuation of a dreadful virus that has undermined the Millennium Development Goals (MDGs).
Also many underestimate the incredible knowledge that youth have at their disposal today in the use of new technologies. These information technologies could have helped to empower youth to quickly tackle such international uncertainties such as the Ebola outbreak if they were granted the opportunity and full advantage.
I hope that there will be an emphasis on knowledge and innovation and a fashioning of ways these can be used to boost youth empowerment and employment and foster the adoption of new technologies to help curb future disasters such as the Ebola, a deadly scourge and a strain which has never been envisioned by the MDG. The Ebola has placed significant financial and human loss and have depleted the huge resources the MDG has put in Sierra Leone in close to a decade. This sadly is at one fall swoop, being swept away by the volcano of a dreadful Ebola disease.