Disrupting the Peace and Defining War in the times of Ebola.

Disrupting the Peace and Defining War in the times of Ebola.

When we think about wars, our mind is often led adrift to imagine only of firearms usage, gun proliferation, shooting and bombing, straying refugees and a whole gamut of such images of unrest caused by the hovering bullets. In like manner, some understand peace erroneously as to mean when the guns are silent. 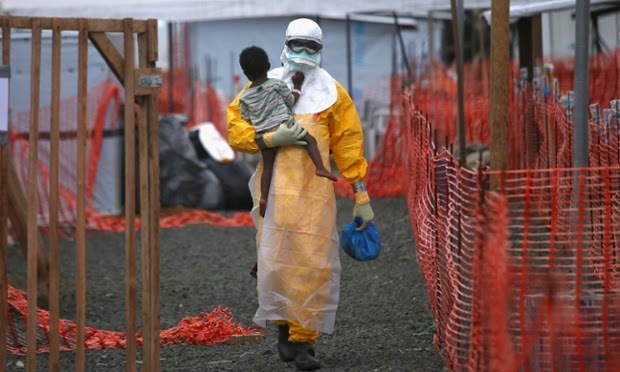 The recent spate of Ebola crises makes me believe that the method of warfare has forever changed from the way it was perceived. The Ebola war has taught us a new lesson and made contemporary warfare even more different. So sad to say that our country Sierra Leone is hosting another war in the form of Ebola, having been attended by a terrifying 10 years of brutal civil war and unrest in which thousands of people died. Everyone thought the peace will not hold sway to another warring and worrying years. But alas, the peace was not for too long. The peace in Sierra Leone was considered fragile for a while, and then slowly but surely, as the years went by, it became entrenched and sustained through successive and recurrent democratic elections.  So no one imagined that if ever there was going to be any disruption that was going to shift the much entrenched peace from its axis, it was a health hazard. With splinters of political in-fighting, softened tensions and political opposition rivalry, the thinking was far from Ebola war.  Just when we thought our country was already finely resting into a peaceful slumber did we get to come to a shocking reawakening of another brutal war that tortures the mind in a way that can only be compared to conventional warfare.
Sierra Leone has again slipped back into a new war, and an invasion akin to the years of civil war.  When the Ebola wormed its way into the Sierra Leone borders from Guinea like the Civil war did from neighboring Liberia, little did we realize how grievous it will be or how prolonged the virus attack and the Ebola epidemic ravaging Sierra Leone will take.

Much like the Civil war era, when the war raged for so many years before the international community could be moved to step in, the Ebola war has seen a slow-paced response from the International Community and this tardy response risked allowing a breakdown of societies in the region, where the outbreak had already claimed more than 4,000 lives. This is a whopping sad loss not just for the countries but for the continent.  Still, without crying over spilled milk, too many people express utter dismay by the maladroit delay from our government to stamp it out when Ebola war first reared its ugly head from our borders and towns annexed to Guinea and closer to home, causing public health panic that was enough to spur a spontaneous and even robust political reaction. Before now, Ebola had caused a number of small, vicious outbreaks within our border towns and then the outbreak quickly spread when the seriousness of it was overlooked, and because of lack of education of the dangers of the disease at its origin, it was not considered much of a threat.
But now, we must move on and show a national commitment to fight this war, with sincerity and a commonality of purpose.
Sierra Leone has won almost 11 years of success in rebuilding a broken and shattered country caused by the civil war. There were too many positive signs of a society putting itself together and exemplified by its resilience, willingness and capacity to live together. This Ebola war has come as a potent threat to disrupt and shatter this unique capacity for the country to live together. Too often, the people have become self-alienated, self-quarantined for the haunting fear of contracting the virus. As the death toll rises, so is the lingering diurnal fear in the minds of the citizenry of what tomorrow or the next day might bring.
Like the war-wounded who were seen whisked away into hospitals in the years of conflict, Sierra Leone sees an influx of sick people in the treatment units, but too many to be accommodated by shortages of beds and staff. There needs a radical move and efforts from all fronts to stop the outbreak and make the unsavory scenes of sick people and a host of dead bodies become a thing of the past.
Much like the populace, Sierra Leone doctors are dying in their numbers, (and a recent count could approximate up to 10 professional doctors). This is alarming for a country with few doctors and specialist. This is also true of the increasing death toll of attendant nurses.
Like other countries around the world, several governments have directly or indirectly invested significant amounts of resources in medical offices to build that Human capacity that is undergoing serious strain and loss due to the Ebola outbreak. This is undoubtedly a long term depletion and weakening of the strength, the root and very fabric of the medical sector to handle unforeseeable health invasion like Ebola. You can imagine the huge burden this great human loss will pose on our country to fill the ranks of already shortages of experiences and seasoned doctors.
The Ebola war is real and a challenging one. It is a real war though our enemy is invisible. At least the appearance of HIV/AIDS disease in the early 1980's, was never considered a war by any estimation as much as the Ebola did.  Ebola caused a number of small, vicious attacks that would have been quickly controlled at our borders.

When the war with weapons and guns forced the economy to crumble on its knees, and business owners shutdown  their enterprises in utter fear, we have seen a repetition of this in companies folding up and hotel dwindling with guest, and the whole economy struggling, whilst the cost of living becoming unbearable for too many people.  Like the signing of the Peace Accord that brought in glaring confidence, so must the government revamp much confidence in the health sector and public workers in fighting the disease. With the emergence of allies in the fight like the international community, hope can be restored. The anxiety and expectations of the populace to end the Ebola war must resonate with the willingness of the government and all parties to fight, must inspire more action and determination to live in peace and see the Ebola war ending in the shortest possible time.
Andrew Benson Greene,  ITU Telecom '11
Jeanne Sauvé '04,  MIT - Build Peace '14