Voice of the Muse 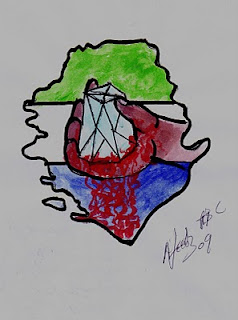 My Poetry
Title: For Your Sparkling Brilliance,

For your sparkling brilliance,
They sold you,
A precious stone,
Destroyed thousands of precious innocent souls,
Leaving in their wake
Many lives at stake,
A severe stake of skulls, blood and bones.

When your sparkling brilliance,
Brings joy and happiness,
Does not form a dismal alliance,
Does not ferment wars,
Is n’t a blood diamond,
Does not leave in its wake
Tears,
Fears,
Skulls, blood and bones.
That beautiful gem stone,
In this country where it has naturally grown,
Will be all my own,
And I shall proudly own.


Belief In:
'Freedom of expression is a cornerstone of democratic rights and freedoms. In its very first session in 1946, before any human rights declarations or treaties had been adopted, the UN General Assembly adopted resolution 59(I) stating "Freedom of information is a fundamental human right and ... the touchstone of all the freedoms to which the United Nations is consecrated."
Other Contributions,
Quotes, Commendations and Awards:
Aureal Writers Club Awards 1996
James B. Boskey Memorial Fresh Faces Awards, 2000
Goi Peace Foundation Essay Writing Awards 2000
Cable and Wireless Childnet awards 2003
Bremen Peace Commendation -Threshold Foundation Germany 2003
Beyond Borders Listen Up Awards 2003
Sauve Scholars Awards 2004
Global junior Challenge Awards 2007
In addition Greene was on the shortlist for the 'digital Visions Fellows' at Stanford University california USA.