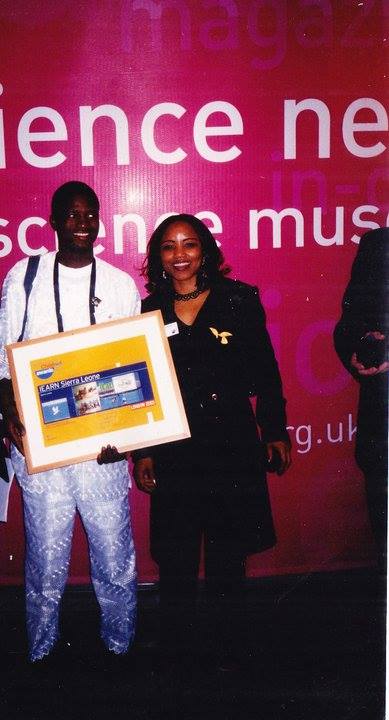 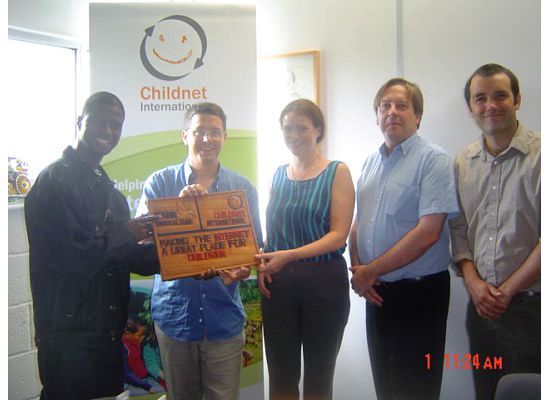 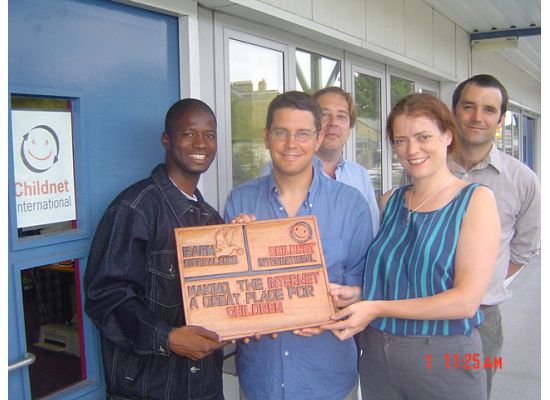 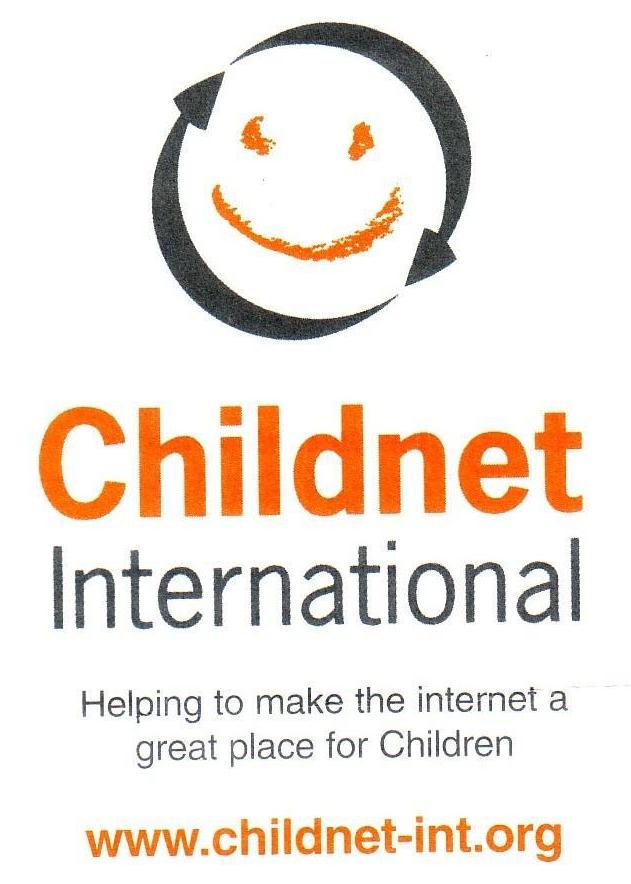 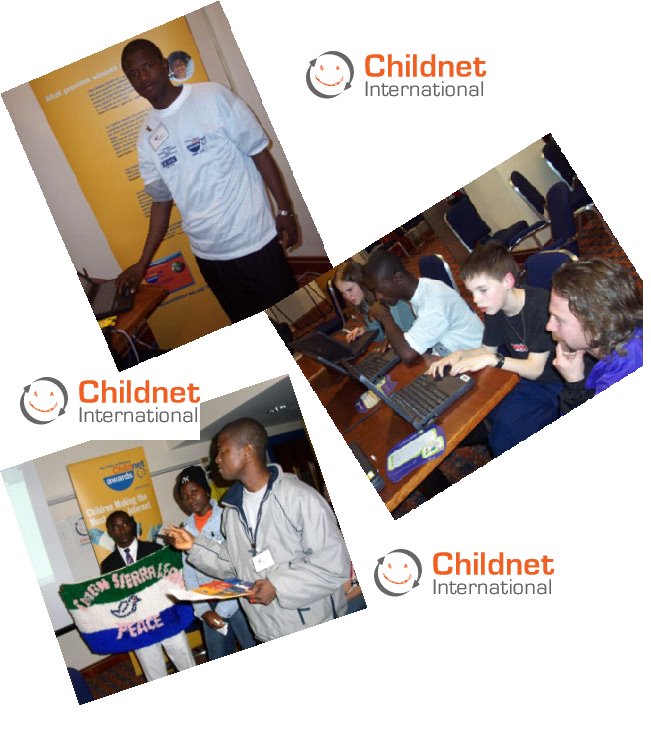 In April, 2003, Andrew Benson Greene was honored at the annual ChildNet Awards in London, U.K. for his contribution to the website project, Peace and Reconciliation. The website received second place in the "New to the Net" category. The mission of the website project was honored for its empowerment of war-affected youth in allowing them to connect to the outside world.

In receiving the Awards at the Science Museum in London April 2003, Andrew Greene noted that "Young people who have faced years of unprecedented violence now become active promoters of peace in their local communities while at the same time, thinking globally through learning the magic of the web and Internet to share with peers that peace can change the world".

In an exclusive BBC interview with Tracy Logan at the BBC Studios in London 2003 and in the company of Award Judge Larry Magid a syndicated technology columnist and broadcaster for more than two decades, whose contributes include CBS News, the New York Times, San Jose Mercury News USA,
Andrew remarked "...The Cable and Wireless ChildNet Awards Ceremony left us with amazement and confidence that our child soldiers project and peace reconciliation project will continue to make a difference." - Andrew Greene" leader and founder of the site.

The programme is run by Childnet International, a non-profit organisation which seeks to make the Internet a great place for children, and sponsored by the Cable and Wireless UK, a leading Global Tele-communication company in the world, Andrew was inspired more to make a contribution in using the internet positively to heal lives.

In the words of the Prime Minister Tony Blair: " The Internet is for everyone - providing social and economic advantage and limitless opportunity to those who use the web. The winners of the Cable & Wireless Childnet Awards 2003 truly bring the Internet to life - inspiring young people to express opinions, share skills and communicate with others around the world.

I am therefore delighted to welcome them to the UK - now one of the world's most 'connected' economies. With a network of over 6000 UK online centres, thousands more can now enjoy the benefits of the Internet - and we have made a commitment to ensure that all those who want to access the Intenet can do so by 2005.

Yet we all have a responsibility to ensure that the Internet is a great and safe place, which can be used by people from all generations. The Awards demonstrate what can be achieved via the Internet and I would like to pass on my sincere congratulations to the winners and to all of those who entered the Awards."

" The work Andrew has prioneered in Sierra Leone is outstanding and worthy of far greater recognition. Childnet International in UK has funded Andrew's projects through the Childnet Academy program which seeks to reward young people who are using the internet for social benefit internationally. In 2003, Childnet brought Andrew and the youth of Sierra Leone to London to recieve his award and meet with the other winners from around the world. This award was presented for Andrew's Peace and reconcilaition project, which grew out of his ground-breaking child soldiers project which Andrew developed directly with young victims of the conflict in Sierra Leone. The awards included training and a grant of UK Pounds 2000. since winning the awards, Andrew has been working on 3 significant areas of development and has continued to develop his project basis as well as his professional studies and training. (a) Setting up fully equipped computers ICt club for peace education in Freetown, developed through the Ministry of Youth and Sports. Andrew was able to source 20 computers initially from computer Aid International in UK with assistance from Childnet. This centre which he steadfastly coordinated supported over 30 youth every week and is meeting the demand for ICT training, youth activities and psychosolcial needs. All work done in the centre was on a volunteer basis and Andrew had to subsidize his management of this project on a shoe-string budget and by working part-time at the Sierra leone educational sector training ICT. (b) Developing further Satelite Centres in Bo District), and in Kono Eastern District. With further assistance and donation from Computer Aid in UK and World Computer exchange, Andrew and his small team of University volunteers and students in Sierra Leone have been able to pilot the development of two additional computer ICt centres with 15 work stattions each at these centres. initial demand was high and the centres are proving essencial resource in rehabilitating youth who till date have been caught up in the conflict of Sierra Leone. There is no other effective non-profit ICT training centre for young people in Sierra Leone and these areas which have proven to be badly hit by a decade of war. (c) Creating International development) and the understanding of the problems faced by child soldiers over the last 10 years. Andrew have been recognized as a Young dynamic leader within his country and beyond. He has represented Sierra Leone at the geneva World Summit on Information Society, (WSIS), and the first World Ethics Forum for Leadership and Integrity in Oxford England. This work included sharing his experience of developing ICT resources, (Both online and offline) in areas where there is conflict. This has helped shaped policy and is used as a powerful case study in in other countries affected by war. See example http://www.ourmedia.org/node/3490 (d) further professional and education training at McGill University Canada. Andrew was chosen by the Sauve scholars program which brings 12 to 14 young leaders from all over the world for a year's research programme to help them enlarge their understanding of the world and make positive contributions to their own countries. During this year of study, Andrew has been fortunate to work directly with institutions in teachning peace education in local schools in canada (WH Day Elementary School) and Europe (International School of Amsterdam). This training has helped Andrew reflect on the strategic priorities as he goes back to Sierra Leone and consider the opportunities to use ICT and expand the work in Sierra Leone but also develop online resources to be able to better challenge young people and seniors around the world on the issues of child solders.

Andrew has used his knowledge, gifts and skills to develop an exiting program which can be built upon and which we believe make a real and lasting impact in the lives of thousands of young people both in Sierra Leone and worldwide.
Andrew have produced a short video whilst at McGill University in Canada on the challenges of child soldiers and the need to stop the use of child soldiers. The educational and intervention work which Andrew is developing through the ICT Computer clubs, gives children a unique opportunity to transform their lives and learn about peace activism. the video poverfully demonstrates this, and shows the initial success in reaching youth s. We will like you to review what practical assistance you might be able to offer to ensure that Andrew's work grows. Working with limited resources, this young pioneer has proven he can make and create both powerful and award winning interner projects, but equally important, develop off line clubs and facilities to young people who are now being trainied in ICT. As he can link young people in schools through the internet and video resources, with other youths in those computer clubs, we will encourage others to support this initiative as a potential model which could be replicated by other young people and organizations around the world. let's work to support Andrew as he develops his locally owned and directed initiative which will have the power to impact the lives of thousands of young people for good going forward. (STEVEN GARRICK DAVIES) CEO CHILDNET UK