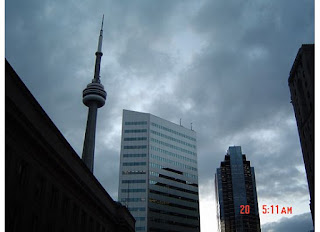 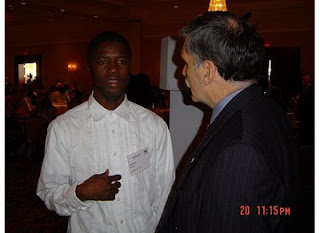 Andrew and (Ret) Lieutenant-General The Honourable Romeo Dallaire in Toronto at the Leadership in Action for Education Conference 2004. This conference was presented by Peel District School Board in partnership with OSSTF-District 19 and ETFO-Peel. It was produced with the support of the Government of Canada through the Canadian International Development Agency (CIDA). 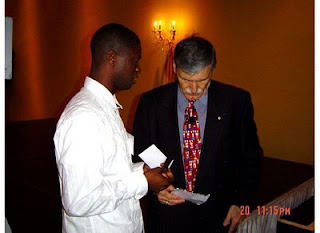 On November 22, 2004 the board hosted Leaders in Action for Education a special conference for grade 7 to 12 teachers and students—a unique opportunity to learn together!

At this conference, Lieutenant-General Roméo Dallaire spoke about the importance of learning more about war-affected children and leadership. Participants also had the chance for group discussion and networking.

This one-day conference attracted 450 grade 7 to 12 educators and students—75 of them were teachers.
The conference focused on the impact of war on children and education. The purpose was to share ideas and resources with teachers and to provide more opportunities for students to develop leadership skills.

The objective was also to raise student and teacher awareness about their place in the world and their level of responsibility for affecting change to assist war-affected children, specifically in Sierra Leone. They attended practical workshops, developed ideas to take back to their schools, and received ready-made resources.
The workshops were facilitated by:
Canadian Feed the Children
Canadian Red Cross
Leaders Today/Kids Can Free the Children
UNICEF Canada
War Child Canada
World Vision Canada
Many of these organizations also provided resources for educators through displays set up in the lobby of the conference site.
At the registration desk, each participant received a conference bag containing resources to help participants implement or supplement global development lessons or activities in their classroom.
International themes discussed under the general theme of war-affected children
The following is a brief list of the international themes and topics discussed under the general topic of war-affected children at the conference:
children living and growing up in a war zone
voices of two refugees from Sierra Leone
awareness and involvement concerning the humanitarian crisis of war-affected children in Sierra Leone
displaced children
the importance of youth involvement
child soldiers, rehabilitating child soldiers
children brought into war in non-combat roles such as cooks, porters and messengers, girls forced to be “sex-slaves” to soldiers or to marry them
the effects of war on children, particularly regarding education
teaching children how to solve conflicts without using violence
emphasis on conflicts in Bosnia, Rwanda, Sierra Leone