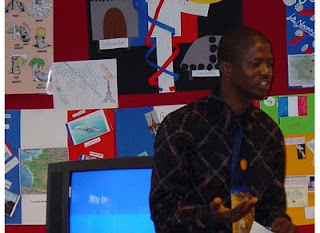 The Hague, Netherlands 2004
The Hague International Model UN Conference THIMUN exists "to uphold the ideals of the United Nations Among The Young," involves youth in making the United Nations "effective and responsive to the needs of the people worldwide." - KOFI ANAN, SECRETARY GENERAL OF THE U.N. On January 28th, 2004, Andrew Benson Greene, Jr. had the honor to be summoned as a Guest Speaker to the 36th session of The Hague International Model UN by the THIMUN Foundation. The overall theme of the THIMUN conference this year was ‘Information, A Power for Change.' Greene spoke amongst several renowned speakers including Lucie de Lophem of UNHCR, The Hague. His speech was entitled ‘The Question of the Promotion and Protection of The Rights of Children’, with particular focus on children in areas of armed conflicts. Like previous speeches and workshops delivered in Beijing, Capetown, Moscow, UK, Geneva, etc., he shared his native country Sierra Leone’s tragedy of its children being torn and tattered apart from family and friends through recurrent acts of violence emanating from the civil war. Greene made mention of the far-reaching effects of physical and emotional scars left on the more than 300,000 children due to warfare. He emphasized the extent of human barbarism of children’s hands being hacked by the sheer brutality of a rebel group in Sierra Leone. Greene also suggested that to assure human rights, the global community must constantly express support and solidarity to the children of the world who are caught up in wars, and that they must be prepared to help the children in any possible way. In turn, the children and youth will be inclined to raise awareness of the need to protect children’s rights on a global level, thereby building a solid foundation for peace and human rights. Andrew Greene on the importance of THIMUN:"When I first heard several years ago about The Hague International Model United Nations (THIMUN), I was not quite convinced of the impact such a simulation could make to the UN and humanity as a whole. My thoughts were that merely having young people brainstorm issues of the UN at such a conference, when decisions at the UN are made by their seniors, rendered the exercise ludicrous. But my perceptions have since changed as I realized that THIMUN delegates were youth who could do more than merely brainstorm, but who also have the verve to put their thoughts into concrete action upon returning to their respective countries. More often than not, the resolutions taken at THIMUN are constructive and presented in the form of an action paper that can be unitized by UN organizations." http://www.iearnsierraleone.org/pages/news/conferences.html